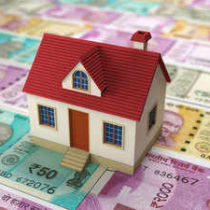 The 25 basis point repo rate cut by the central bank won’t have an immediate impact on your home loan EMIs.
Even if banks cut their MCLRs, there won’t be any reduction in your loan rates due to the reset clause of MCLR.

The broader debt and equity markets did not react positively to the 25 basis point cut in the repo rate by the RBI because they were anticipating it. “Investors should see the historical movement in 10-year government bond yield – it came down from 8.2% to 7.3% in just five months. This is because markets usually react in anticipation,” says Amar Ambani, President and Head of Research, Yes Securities.

While the repo rates are still 25 basis points higher compared to what they were a year ago, the 10-year government bond yield has gone below its February 2018 level. “Muted positive response, especially on long-term bonds, was also because of the market’s worry about their increasing supply,” says Dwijendra Srivastava, CIO, Debt, Sundaram Mutual Fund.

Don’t expect immediate reduction in your home loan rates because there is no rule on banks passing on these rate cuts immediately. Banks now follow the marginal cost of funds based lending rate (MCLR) and the impact of repo rates on this regime is small. However, borrowers who take loans from April 2019 onwards may gain from the reduced rates because banks have been asked to link floating rates to external benchmarks such as repo rates, 10-year government bond yield, etc. 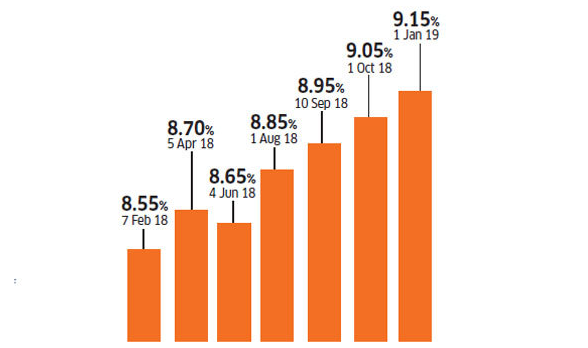 HDFC rates for home loan of over Rs 75 lakh over the past year Women borrowers are charged 5 bps less.

Even if banks cut their MCLRs, there won’t be any reduction in your loan rates due to the reset clause of MCLR. “The reset clause on MCLR is usually six months or 12 months and it happens only on specified dates, so you won’t benefit if the MCLR is reduced at any other time,” says Adhil Shetty, CEO, Bank Bazaar.

Opt for short-term debt funds
Experts believe rate cuts will continue in 2019 because of the RBI’s reduced inflation outlook average inflation in 2019 is expected to be 3.9%.

Beyond the rate cut..
The RBI also linked the risk weight of NBFC with their credit rating in its recent policy meet. This has brightened the prospects of well-managed NBFCs. This will insulate the wellrun NBFCs from a broader liquidity crisis and help them raise money at competitive rates, says R.K. Gurumurthy, Head Treasury, Lakshmi Vilas Bank.

Better-rated NBFCs will be able to reduce their borrowing costs due to lower risk weights and, as NBFCs are pass-through vehicles, the benefits of lower cost of borrowing will percolate into the economy too. “The intention of this policy measure seems to increase credit flow to the NBFC” and thus raise the overall credit in the economy, says Renu Sud Karnad, Managing Director, HDFC.

Ambani of Yes Securities concurs with this view: Lower borrowing cost for highly rated NBFCs will reduce their lending rate and this may help auto, consumer durable companies, among others. Impact of this policy will be more than the 25 basis point repo rate cut.