Every sector or colony has different rates, and for the first time, roads like Golf Course Road, MG Road, Delhi-Gurugram expressway and Sohna road have been categorised as a separate circle with similar rates

GURUGRAM: The district administration has announced revision of circle rates in Gurugram after a gap of four years, to be implemented from Monday, February 12, reversing a trend where circle rates had remained unchanged in 2014-15 and 2015-16, before being reduced by 5-10% over the past two years, owing to slump in the real estate sector. Realtors believe the upward revision is an indication of revival of the sector.

The new circle rates has divided the city into different areas. Every sector or colony has different rates, and for the first time, roads like Golf Course Road, MG Road, Delhi-Gurugram expressway and Sohna road have been categorised as a separate circle with similar rates.

Circle rates for areas like Ambience island and Aralias have shot up, while it has remained mostly unchanged in areas like Ardee City, South City and Mayfield Gardens. Rates have increased in villages within city limits, while rates of flats and independent floors in new sectors have witnessed marginal change. Circle rates of commercial properties have increased significantly across the city.

“For the first time, circle rates will be applicable for as many as 15 colonies, which have been regularised and brought under MCG, and now properties in these areas can be regi-stered,” said district revenue officer (DRO) Hari Om Attri.

He added the administration has tried to rationalise prices of properties in different areas of the city. “Earlier, some adjoining sectors had huge difference in circle rates. We have tried to bring rates of adjoining areas on a par,” said Attri.

“After years of slump and radical reforms like demonetisation and Rera, the real estate market is in revival mode. People have started buying houses and we’re expecting a rise in demand,” said Rahul Singla, director, Mapsko Group. Ssumit Berry, managing director of BDI Group, said affordable housing is going to be the sunrise area in real estate. “Demand for affordable housing is expected to increase, as more and more end-users are buying homes,” said Berry.

To keep real estate and land prices in urban and rural areas in tune with market rates, the Haryana government in December 2017 had decided to revise collector rates twice in a financial year. “Most likely, the next rate revision will happen mid-year,” said the official, adding the step was taken to ensure there is no major gap between market price and the collector rate of properties.

Collector or circle rate is the minimum price at which a property is registered when being transferred, and stamp duty from it is a major source of revenue for the government.

Earlier, these rates were revised once a year, but experts said a sustained slowdown in the real estate market has forced the government to fine-tune levies on real estate.

Senior officials in the revenue department and department of town and country planning said this move comes amid signs of recovery in the market. There is an upswing in sale of plots, ready-to-move-in houses and built-up houses, because of which, the government wants circle rates to be in sync with market rates. 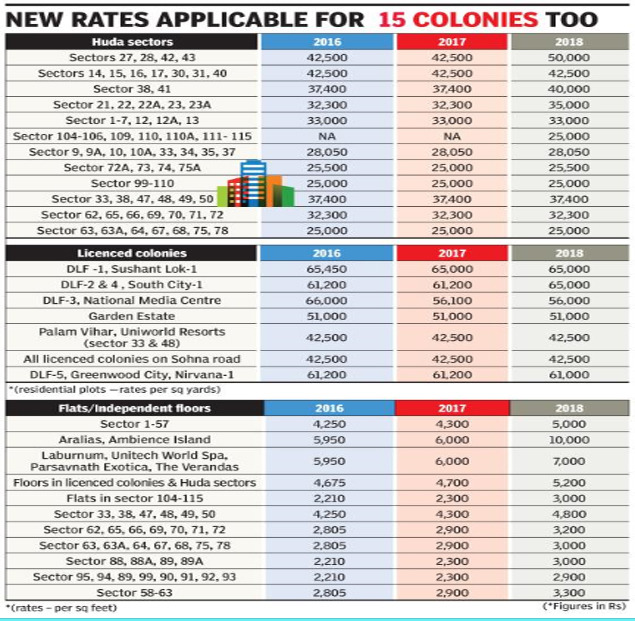