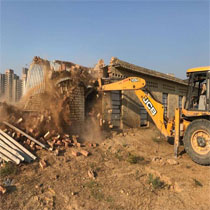 The Huda had acquired land for development work in sectors 57 and 115, but over a period of time some plots were excluded from acquisition by the urban development authority

GURUGRAM: The enforcement wing of department of town and country planning (DTCP) on Monday demolished around two dozen structures, mostly shops along roads and in green belts, in sectors 81 and 95. While six shops were demolished in village Hayatpur, around 18 shops were razed in village Bandh to clear green belts and areas along sector roads.

The Huda had acquired land for development work in sectors 57 and115, but over a period of time some plots were excluded from acquisition by the urban development authority. Private developers have received around 1,156 licences in new sectors to develop residential and commercial projects, but there are patches of land owned by individual farmers.

As these sectors were being developed, several unauthorised structures have also mushroomed on this land. They were built without seeking any approvals from the department concerned. Most of these structures — shops, offices of property dealers and labour hutments — have come up in green areas along sector roads.

“We don’t want any unauthorised structures in these sectors,” said assistant town planner (ATP) Amit Madholia, adding that the department is taking action against such structures at this stage to keep sectors as the way it had planned.

District town planner (enforcement) Rajendra T Sharma said the department had demolished illegal structures in these sectors on November 30, and the next drive would be carried out in January. “We have identified around 25 pockets in new sectors where several unauthorised structures have been built,” said Sharma.

Neeraj Yadav, a resident of Sector 84, said many unauthorised shops had been constructed along sector roads. “These shops are a nuisance and pose security threat to residents,” said Yadav.

Poonam Sharma, a resident of Sector 82, said new sectors had little or no police presence, and these unauthorised shops are a den of illegal activities. “New sectors are still under development. No police station has been constructed yet. Such unauthorised pockets 0 the safety and security of residents,” said Sharma.